1. The "Positive," from the Electric Cleaner Company of Chicago, is another black box on wheels, looking like something out of a science fiction novel. Published in the June, 1909 issue. Click big. 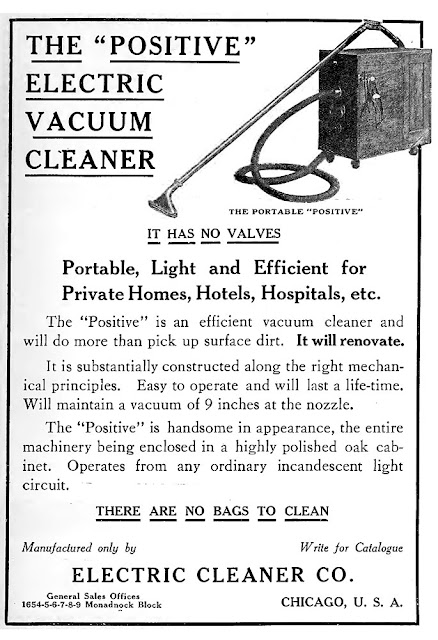 Something that looks a little bit more like we would expect today, the Duntley could be picked up and carried by your maid. From the May, 1909 issue. 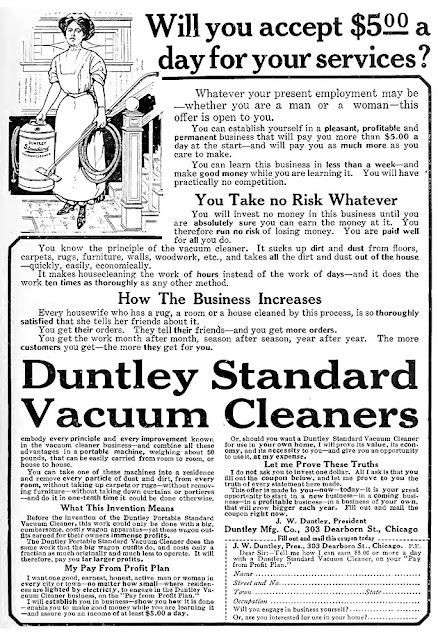 The history of product design is the subject for someone else's blog, but you can't avoid thinking about it. Pretty soon the maid would give way as chief domestic tool user to the homeowner herself, a victim of economic necessity and a whole new customer demographic.

Here we have an ad for the National portable vacuum cleaning machine, as published in the July, 1909 issue of POPULAR ELECTRICITY. Looks more like industrial equipment than a home cleaning device, but perhaps that was its designer's intent. Your maid should be happy to use it; it will make her job simpler, and she can spend more time making other things just exactly perfect. Click to enlarge. 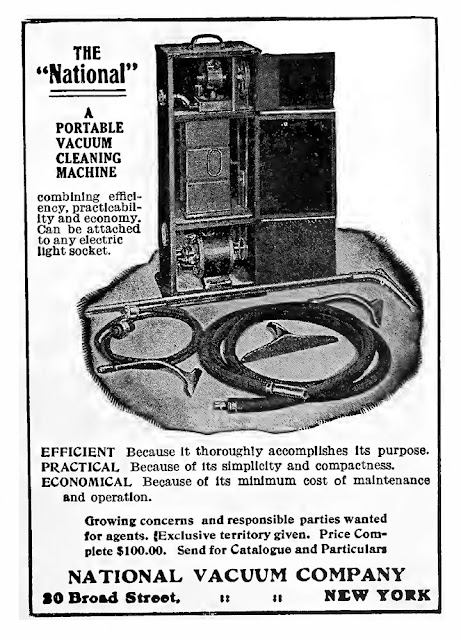 First published in 1908, POPULAR ELECTRICITY appealed to  early adopters, experimenters, businessmen and engineers, and all interested in the latest changes occurring in the world around us. Here's a gallery of covers, to give you some idea of the kinds of things the publishers thought  of interest to their readers.

I'll have some more vacuum cleaner ads from this era shortly; they are interesting to compare to each other, to try to discern just who the manufacturers were aiming the products at, and which would be the forerunners of today's products.
Posted by magscanner at 7:27 PM 5 comments:

The Future of Electricity, As Seen in 1907

The July, 1907 issue of THE WORLD'S WORK carried an article entitled "The Age of Electric Servants," by Arthur W. Page. Here are the six pages of the article; click on an image to view a larger copy that you can read. Send a note if you'd like to see a higher-yet resolution version of the pages. 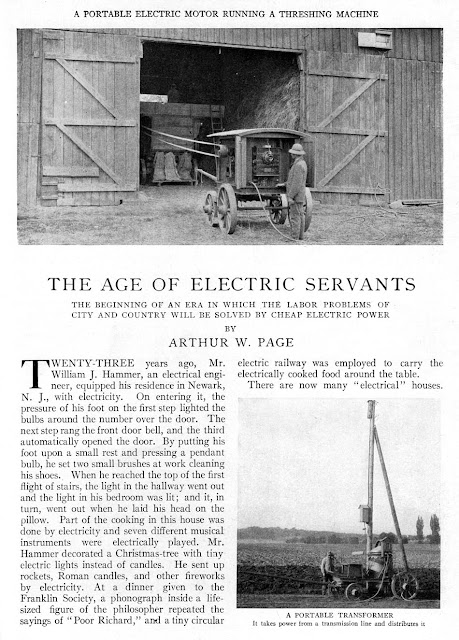 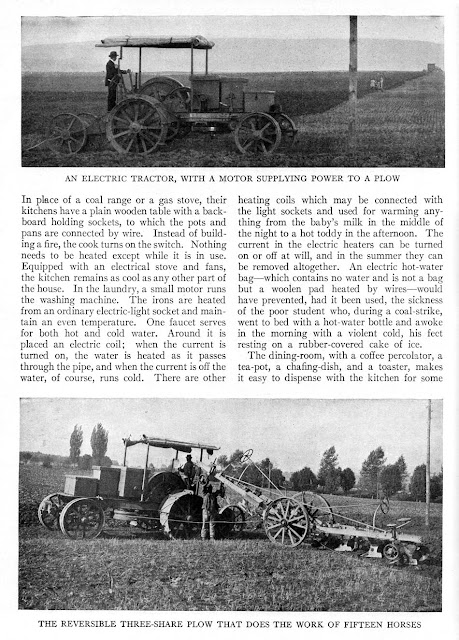 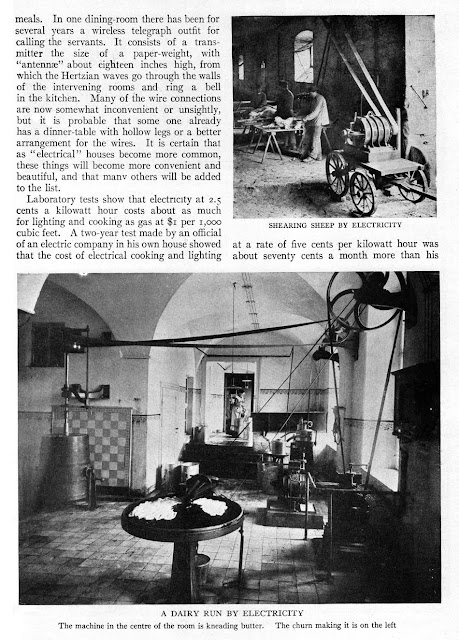 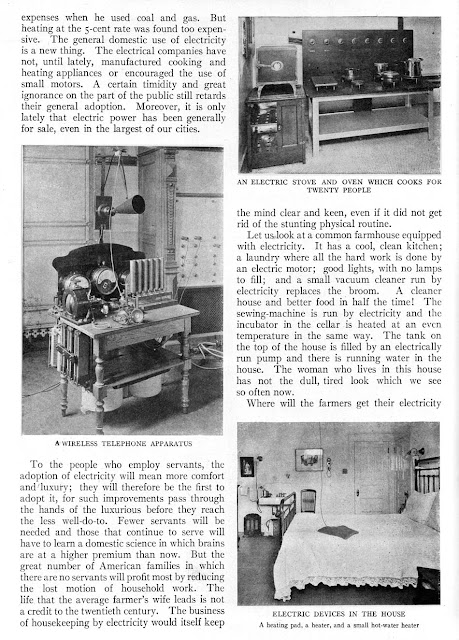 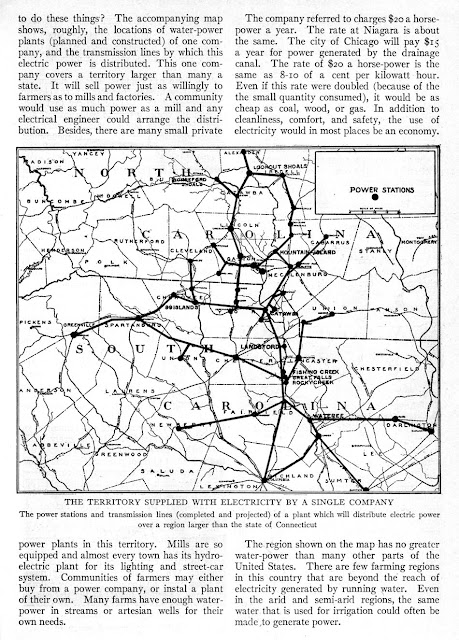 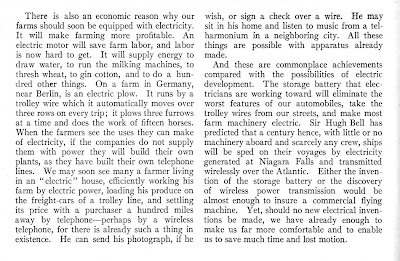 THE WORLD'S WORK was a serious monthly magazine aimed at business and government leaders, with meaty articles about new trends, business methods, improved forms of government, and the like. Walter Hines Page was the founding editor of the magazine; this article's author took over as editor in the due course of time. I picked up twenty or thirty bound volumes of this magazine when the Palo Alto Public Library deaccessioned them a couple of years ago, and have been slowly working my way through them looking for articles of interest for the various blogs and websites.
Posted by magscanner at 2:45 PM 5 comments:

Radio When It Sizzled

Nowadays we generate radio signals as continuous waves, but in the beginning it was generated by a spark, and if you were lucky it was tuned and filtered. You know about electrical sparks; they generate radio-frequency interference (RFI), with the static from the electrical discharge of lightning as the most widely known case.

But even as late as 1922, you could build a spark-gap station from components you could buy from Sears, Roebuck (click on the image to make it big--as big as your screen if you want): 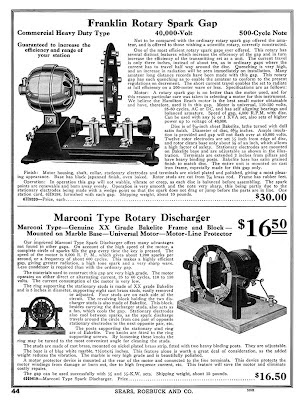 This is a page from the 1922 catalog of Electrical Goods and Radio Apparatus, a specialized sixty-four page publication that featured electrical appliances, and the parts and equipment you would use to build a receiver or your own amateur radio station. These rotary spark gaps are just about the technological peak of spark design; pretty soon it was all over for spark, and the soothing tones of continuous-wave signals blanketed the bands.

Steve Davis found a copy of this catalog, and scanned it; I cleaned up all of the images (64 large pages; I must have been out of my mind) and published it as an e-book. It's now on sale in ePub format (for any ebook reading device) and in Kindle format (for Amazon's hardware).

You can buy it on Amazon, Barnes and Noble, Google Play, and at the Apple iBooks store (search terms: Sears 1922 radio catalog). It's beautiful, if I say so myself, and it's $2.99.

Yes, it's cheaper than a latte.

There's a picture of the cover, and a little more about the fun and excitement of squeezing ten pounds of image data into a two-pound box, on the Early Radio blog. The big version of the image is exactly the image that's used in the book (along with sixty-three other images) so you can get an idea of just how much detail is being shown.
Posted by magscanner at 1:37 PM 3 comments:

From the Library of Congress Flickr stream "1930's-40's in Color" is this picture of a unique corn harvesting technique and machine: 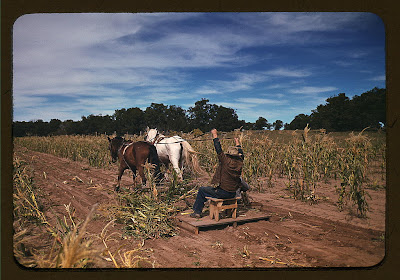 Useful and Interesting Links and Blogs